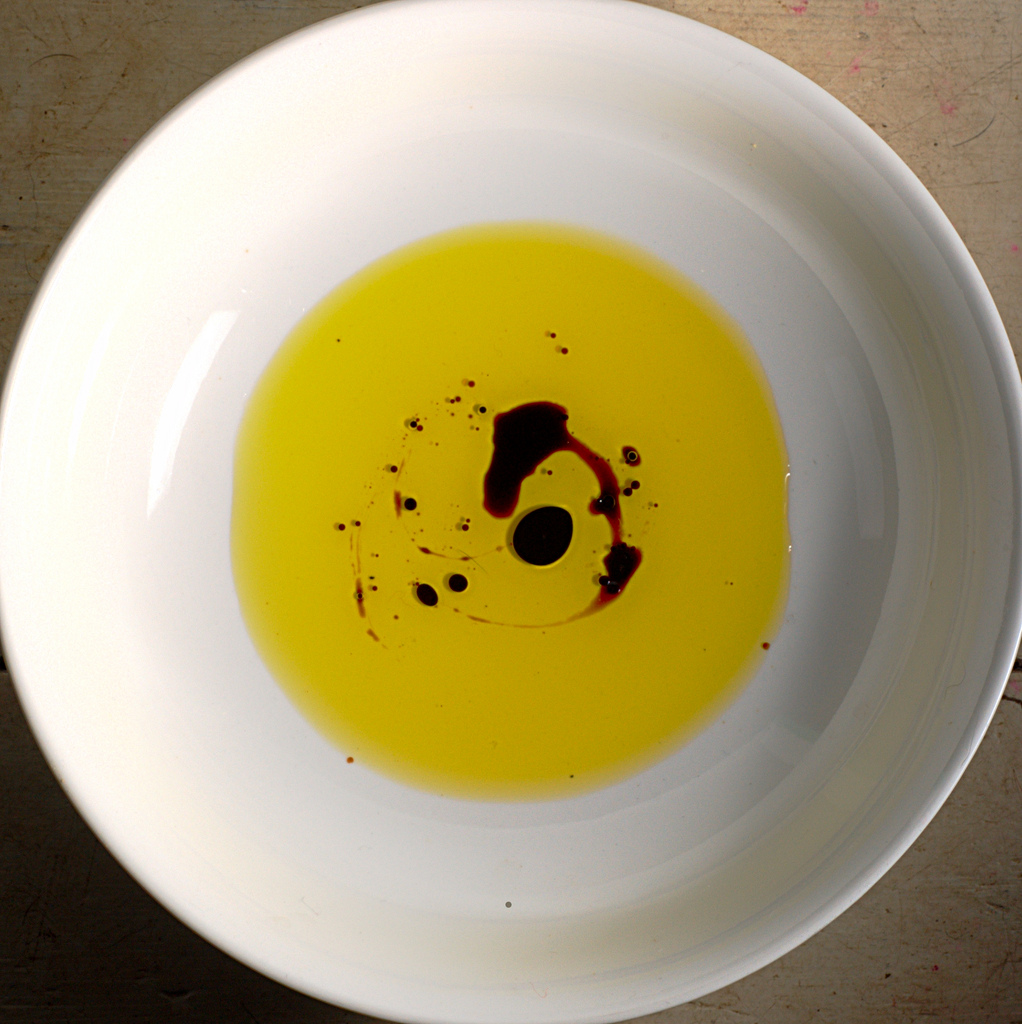 90% of the world’s olives are used to produce olive oil. The wild olive tree originated from Asia Minor, in modern Turkey. The first cultivated olive tree is thought to have taken place in Crete 5,000 years ago, and used primarily for the fruit's oil (cooking, oil lamps, and cosmetics), and not actually for the olives themselves. The genus name for olives, olea, even comes from the ancient Greek word for “oil” (elaia). Homer called olive oil "liquid gold." Olive trees were planted throughout the Mediterranean basin during the Roman empire. Olive oil is produced in warm, dry climates throughout the world, including California, South Africa, and Australia. The olive tree is hardy and has great longevity, spanning centuries. Other than pruning, it requires minimal cultivation.

Olive oil is unique amongst all oils because it is oil produced from the fresh juice of a fruit, not from a seed, nut, or grain. The pulp surrounding the large seed can be as much as 30% oil. Olive oil is made as the olives are beginning to turn from green to purple. The olives are cleaned, and the pulp and pit together coarsely crushed and finely ground to break open the cells and release the oil. The paste is pressed to squeeze the oil from the solids. Traditionally, this process was called the "first pressing", to separate it from subsequent repeated pressings which yield more oil but of lesser quality.

The color of olive oil may range from “olive” green (from chlorophyll) to deep yellow (from carotenoids like beta carotene and lutein) in color. Flavor is influenced by the composition of aromatic molecules such as flowery terpenes, fruity and nutty esters, and fatty acid breakdown molecules that impart grassy-ness. In recent years, olive oil has been noted for its potential health benefits, including lowering “bad” LDL cholesterol and raising “good” HDL cholesterol. Furthermore, it is a monounsaturated oil (chemically containing only one double bond), and considered healthful for the heart.

Olive oil is a staple in Mediterranean cooking. Olive oil is prized for its aromatic flavor. In general olive oils from Spain or France are less aggressive than those from Greece or Central Italy. Northern Italy, Sicily, and Crete also produce lighter styles of olive oil. California, an increasingly important center of production, has oils that vary from mild to pungent.

"Virgin" refers to oil that is produced by only physical means, with no chemical treatment. High quality, minimally refined olive oils include virgin and extra virgin olive oils, both obtained through single “cold” pressings of raw olives; the resulting juice is separated into oil and water. Mechanical disruption from the pressing process releases floating, unstable free fatty acid chains. If the oil meets certain criteria of free fatty acid content, it can be labeled as extra-virgin. In the European Economic Community, "extra virgin" olive oil must contain < 0.8% free fatty acids while "virgin" olive oil must have <2%. Currently, the U.S. does not have similar labeling regulations. Oils containing higher free fatty acids are highly processed ("refined") to remove impurities, and neutralize strong taste and acid content using chemicals. Olive oils can then be filtered to become clear or left unfiltered (cloudy). Unfiltered oils must be used more readily.

The rich assertive fruity flavor of extra-virgin olive oil can be best appreciated when it is used uncooked. Regular olive oil (not extra-virgin) olive oil, which is produced by combining a neutral chemically refined olive oil with some extra-virgin oil to boost flavor and aroma, is often a better choice for cooking due to its more restrained flavor and higher smoke point.

The cloudiness in olive oil is caused by sediment (small pieces of olives) extracted from olives during pressing and gives added flavor and color. Storing olive oils in the refrigerator can also cause cloudiness due to polyphenols that become insoluble. Warming olive to room temperature will clear the opacity.

Olive oil should be stored in cool, dark environments, rather than on a kitchen countertop or windowsill. This is because fresh olive oil contains chlorophyll, which absorbs light readily and causes undesirable photo-oxidation reactions, creating stale, harsh flavors. It is recommended that unopened olive oil be replaced after 12 months, opened olive oil every 3 months.

The major olive oil producers in the world are, in order: Spain, Italy, and Greece, which together account for 75% of the world's supply. There are many olive cultivars resulting in different types of olive oil. In Greece there are Koroneiki, Lianolia, Chondrolia, Tsounati, and Patrinia olives, among others. In Italy, notable varieties include the Moraiolo, Frantoio, Leccino Pendolino olives. In France, the Picholine cultivar is prominent. In Spain, the most important varieties are the Picual, Arbequina, Hojiblanca, and Manzanilla de Jaen. In California, the Mission olive is common.

Other components of olive oil contribute to its potential anti-angiogenesis properties. Luteolin is a flavone that inhibits the angiogenesis growth factor VEGF. In addition oleocanthol in olive oil has anti-inflammatory COX-inhibitory activity, which decreases prostaglandins, and suppresses angiogenesis. It has been estimated that 4 tbsp of olive oil imparts the same anti-inflammatory effect as 1/10 of an adult dose of ibuprofen. Furthermore, in dietary studies in which 2 tablespoons of extra-virgin olive oil were given to patients, olive oil appeared to displace omega-6 fatty acids (linoleic and arachadonic acids) in the body, which are pro-angiogenic, without adversely affecting omega-3 fatty acid levels.

There is no international definition of "cold-pressed"; olives in Tuscany and Liguria in Italy are collected in November and ground at night at low ambient temperatures, while olives pressed in warmer regions such as Southern Italy may be pressed at a higher temperature, although not heated.

Minimally-refined olive oil contains more polyphenols than other oils; in contrast, canola oil is processed to the point that few polyphenols remain. The difference can be seen by refrigerating oils since polyphenols become insoluble below room temperature.

Specific olive cultivars can vary up to 50% in their concentration of anti angiogenic phenols, for example Arbequina (25.5 mg/kg) compared to Picual (37.9 mg/kg) olives.

Light exposure and long storage decreases flavor and nutrients in olive oil; store away from light and replace old oil after 12 months.