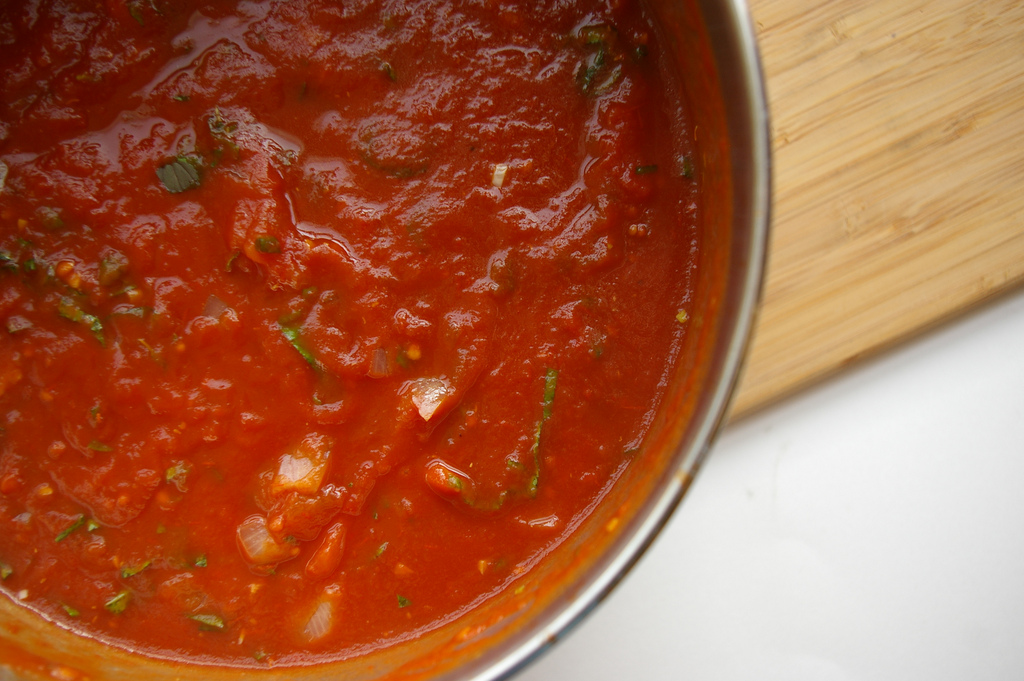 Summary: Tomato-based products like tomato sauce and tomato paste are rich in lycopene, a natural red pigment that has anti-tumor and antiangiogenic properties. Large population-based studies have shown that men whose diets are high in lycopene have a lower risk of developing prostate cancer. A study published in the Journal of the National Cancer Institute adds to this information by indicating that just one meal per day containing tomato sauce may have protective effects in men with early stage prostate cancer. The 32 men in the study who ate the lycopene-rich meals for three weeks had evidence of less oxidative damage in their prostate and reduced blood levels of PSA, a marker for prostate cancer.

Epidemiologic studies suggest that tomato-based foods rich in lycopene can help lower the risk of prostate cancer. One large population-based study in particular, the Health Professionals Follow-Up Study, found a more than 20% reduction in the risk of prostate cancer among men who consumed two or more servings of tomato sauce per week over a 12-year period. (1) Lycopene is a natural pigment that gives tomatoes their bright red color, and has been shown in laboratory studies to inhibit the growth of tumor blood vessels (angiogenesis). In studies conducted in mice, the antiangiogenic effects of lycopene were associated with both slower growth of existing tumors and reduced spread (metastasis) of cancer to other parts of the mice’s bodies (2).

Adding to this evidence, a study conducted by researchers at the University of Illinois at Chicago suggests that the beneficial effects of lycopene on prostate health could be obtained by eating just one tomato-sauce based meal per day (3). Tomato sauce is particularly rich in lycopene because it contains tomato paste, which has a high lycopene concentration. There is also evidence that lycopene obtained from tomato sauce is better absorbed by the body than from whole tomatoes. The study, which was published in the Journal of the National Cancer Institute, involved 32 male subjects, predominantly African American men aged 60-74 years, who had recently been diagnosed with early stage prostate cancer. While waiting to receive curative prostate surgery, the men were instructed to eat one meal per day incorporating commercially made tomato sauce containing about 30 mg of lycopene. The meals included lasagna, stuff shells, baked ziti and penne pasta, and were consumed for three weeks.

One finding from the study was that the prostate tissue of the men who ate tomato sauce had a significant reduction in oxidative DNA damage by free radicals—harmful chemical byproducts of the body’s natural metabolism. Free radicals can damage cell DNA directly, leading to cancerous mutations, and are also thought to stimulate angiogenesis. Another interesting finding was that the subjects had slight reductions in their blood levels of prostate specific antigen (PSA) after starting their tomato sauce-rich diets. PSA is routinely used as a marker for prostate cancer, although its levels can be influenced by other factors.

Tissue samples taken during surgery revealed an almost three-fold increase in the concentration of lycopene in the prostate tissue within a short time. This finding would indicate that the affects observed in the study were indeed due to lycopene exposure of the prostate. The findings of this study need to be confirmed in a larger trial incorporating a placebo control group, but are nonetheless intriguing. Lycopene has proven antiangiogenic activity and is excellent candidate for use as a chemopreventive food.